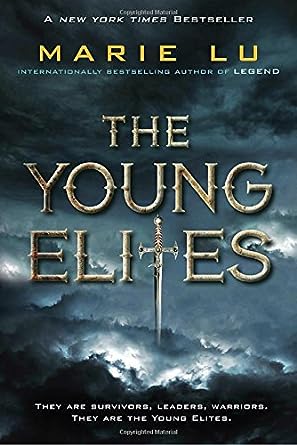 A friend recommended The Young Elites to me at least a year ago, and I just got around to reading it the other day. I wish I hadn’t waited so long. It’s one of the strongest YA series I’ve read in a long time–up there with the work of Sarah J. Maas and Maureen Johnson, partially because of her fantastic world-building, but mostly because of the strength of her writing.

The snappy clip of Lu’s plotting, much like Maas’ and Johnson’s, keeps the reader hooked from the beginning. There isn’t a moment when I thought a section was boring, or misplaced in the greater scheme of the narrative, which attests to the author’s crucial choices about how to present this unusual story.

The Young Elites–the first novel in Lu’s Young Elites trilogy–introduces the readers to a world that resembles Italy in the 1400s at a time when a generation of “malfetto” children is reaching maturity. Some years prior to the events of the novel, a blood fever tore through the world, leaving many dead; the few who survived were left with permanent markings.

Some of these “malfettos”–as they are derisively called–have developed special powers, and a special legion controlled by the throne, known as the Inquisition Axis, is determined to root them out of society through the passage of harsh laws and, increasingly, through state-sanctioned murder.

The story focuses on sixteen-year-old Adelina Amouteru who flees home after accidentally murdering her father with her powers. She is spared from capital punishment at the hands of the Inquisition Axis by a group of vigilante malfettos known as the Young Elites.

As she slowly joins their ranks, she learns that their ultimate goal is to overthrow the king and queen in order to finally undo the unjust system oppressing people like them. Adelina believes in their mission, but it becomes clear that there is something dark wedged deep into her soul.

Through deft characterization, Lu develops a compelling anti-hero–a protagonist who is, essentially, a villain–but who blurs the lines between good and evil in the most fascinating ways. She is joined by a series of similarly scarred Young Elites who are driven towards the same goals, but some of whom distrust Adelina.

When I reached the end of the first book, I found myself so immersed in the Young Elite world and Adelina’s fall from grace–that I know Lu had created a truly compelling piece of fiction.